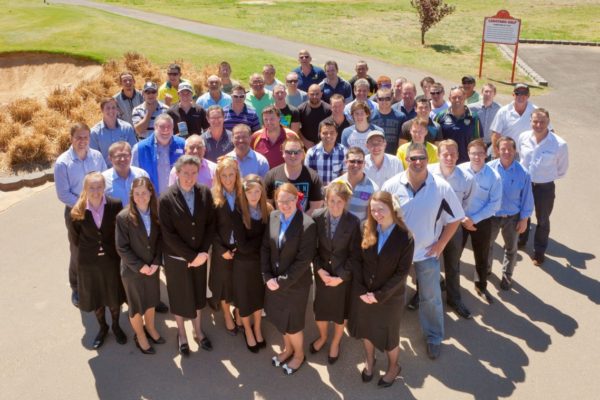 As Rapid Plas celebrates its 30th birthday, we reflect on the origins of the innovation and engineering that has guided the manufacture of tough but smart looking products for the harsh Australian environment.

Our founder, Michael Firth, grew up on a family farm just west of Tamworth. He began his working life as a civil engineer after starting a company building roads and bridges around country NSW. But the farming blood ran thick, and in 1975 he sold the bridge building business and bought a farm about 30km out of Tamworth called Apple Tree Flat. Here he ran a cattle feed lot of over 1,500 head and later a sheep feed lot.

Life as a livestock farmer was hard, so using his engineering experience and with the help of his sons, he designed the “Rapid Sheep Handler” which made it much quicker and easier to turn sheep on their backs to trim their hooves. Many farmers in the area quickly began to see the benefit and began to use them too.

During this time the rotational moulding process for plastics was introduced into Australia. Being an innovator with an engineering background, Michael successfully entered the rotational moulding industry. With the help of his sons they built their first oven to mould the still popular plastic longline water trough and so, in 1990, Rapid Plas was born.

In 2020, as we celebrate our 30th anniversary, Rapid Plas is still led by two of Michael’s sons, David and Jim. Innovation and engineering remain the backbone of Rapid Plas and we strive to build products to the high standards he set.

There have been many pivotal moments on the journey - a request to manufacture a compost tumbler was the inspiration for the first Rapid Plas water tank; the decision to process raw materials in-house was critical to controlling product quality, and most recently, the focus on innovation and engineering has seen Rapid Plas utilise nature’s strongest geometric shape, and incorporate new technology, new engineering and new chemistry in its unique Crown Force™ design to create the best-ever poly water tank.

If you want to benefit from our thirty years of experience or know more about the best-ever poly water tank, talk to our expert team on 1800 816 299 or email sales@rapidplas.com.au with your enquiry.